Natural-Gas Prices Surge, and Winter Is Still Months Away

If you are thinking of converting to natural gas you may want read these exerts from an article about natural gas prices which appeared in the Wall Street Journal on September 19, 2021.

Natural-gas prices have surged, prompting worries about winter shortages and forecasts for the most expensive fuel since frackers flooded the market more than a decade ago.

U.S. natural-gas futures ended Friday at $5.105 per million British thermal units. They were about half that six months ago and have leapt 17% this month.

It is supposed to be off season for demand, and prices haven’t climbed so high since blizzards froze the Northeast in early 2014. Analysts say that it might not have to get that cold this winter for prices to reach heights unknown during the shale era, which transformed the U.S. from a gas importer to supplier to the world.

Rock-bottom gas prices have been a reliable feature of the U.S. economy since the financial crisis. Gas crashed and never recovered thanks to the abundance extracted with sideways drilling and hydraulic fracturing. Gas is burned to generate electricity and heat homes and to make plastic, steel and fertilizer. A substantial and sustained increase in price would be felt from households to heavy industry.

The U.S. Energy Information Administration on Thursday will give a fresh estimate of the volume of natural gas in storage, which it last estimated to be 16.5% less than a year ago. Now is the time of year when drillers fill storage tanks and caverns to get through winter, when demand is greatest and households are most exposed to higher prices in their heating bills.

“The time to replenish stocks for the winter is rapidly running out,” said Lindsay Schneider, an analyst with consulting firm RBN Energy LLC.

Meanwhile, supplies have been depleted by a series of weather events. February’s freeze in Texas lifted demand while clogging wells with ice. June and July were the hottest on record and drought out West dried up hydropower production, which meant more gas than normal was needed to power air conditioners. Late last month Hurricane Ida forced nearly all of the Gulf of Mexico’s gas output offline. More than a third of the Gulf’s gas production remained shut as of Friday, according to the Bureau of Safety and Environmental Enforcement.

Similar factors are at play in Europe, where prices have been setting records all summer. In Asia, buyers are paying more than ever for deliveries of liquefied natural gas, or LNG, to sail across the Pacific instead of to Europe.

The supply deficit is particularly acute in Europe, where inventories are thin thanks to hot weather, lackluster wind-power generation and lower imports from Russia. Goldman Sachs Group Inc. analyst Samantha Dart said that stockpiles in northwestern Europe have recently been about 24% below average.

Prices have risen so high in Europe that Ms. Dart estimates U.S. prices need to climb to $17 with no corresponding rise overseas before it becomes uneconomic to ship liquefied shale gas across the Atlantic. She recommends that gas consumers buy out-of-the-money call options, or options to pay more than current futures prices, to guard against price increases should this winter turn out colder than normal.

For over 25 years, Hart & Iliff has offered a winter price protection program for our heating oil customers.  Initially, we offered both a fixed price and a capped price program.  In the last few years, we transitioned away from a fixed price, because it offers no downside protection, if the price drops.  Even though it’s been clearly disclosed, each time prices drop during the winter, customers are extremely unhappy about being locked in at a higher price.  For example, during the 2014/2015 heating season prices dropped $1.40 per gallon during the winter.  This could easily happen again this winter. 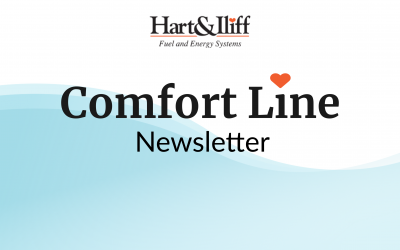 Unsurprisingly, we’ve received calls about two connected issues—the surge in fuel prices and supply concerns. Russia is the world’s third largest oil producer, generating approximately 11% of total world production. The Russian invasion of Ukraine shocked the energy markets, sending crude oil to record territory and spiking all energy prices. We saw increases from our heating oil suppliers of more than $1.50 per gallon in less than a week! People are also concerned that there will be interruptions in supply that will cause them to run out of fuel. You can count on the fact that Hart & Iliff will not let you run out of oil. We have been in business for more than 130 years and have very strong relationships with suppliers and financial institutions.

A Letter to Our Customers About The Recent Oil Price Spikes

The Russian invasion of Ukraine shocked the energy markets, sending crude oil to record territory and spiking all energy prices.  We’ve had increases from our heating oil suppliers of over $1.50 per gallon in less than a week!

"We are very pleased with your company. You do what you promise to do. You arrive when you promise. Your level of service is extraordinary compared to the competition."

"We are very pleased with the service you gave us in fixing our air conditioner. Each person who came to home was understanding and sympathetic to the situation at hand. The number of days and long hours the team worked during the one of the hottest summers on record, far exceeded our expectations. Thanks to all who worked to get our air conditioner back on-line."

"I truly appreciate your courteous professional installers and a job well done!"